When the Kosciuszko Wild Horse Heritage Act was passed by the NSW Parliament in 2018, it was touted by the NSW government as a way of being more inclusive of community voices.

Here we take a closer look to see whether community views are being properly aired and represented by the process created under this law to develop a new horse management plan for Kosciuszko National Park.

When John Barilaro, the chief proponent of the law, introduced it into Parliament he said, “Through the community advisory panel, for the first time the community will have direct involvement in shaping the management of brumbies within the national park.”[1] In 2019, Mr Barilaro also suggested that the process under this law will “…put all the stakeholders around the table…by bringing the stakeholders together, through the plan of management and an advisory committee with a broader range of representation…We have a balanced approach, a genuine approach to end the war.”[2]

It appears the opposite has occurred. The community has been locked out of the process and the NSW government has conducted a one-sided, secretive process to develop a new horse management plan that has involved very few members of the community. 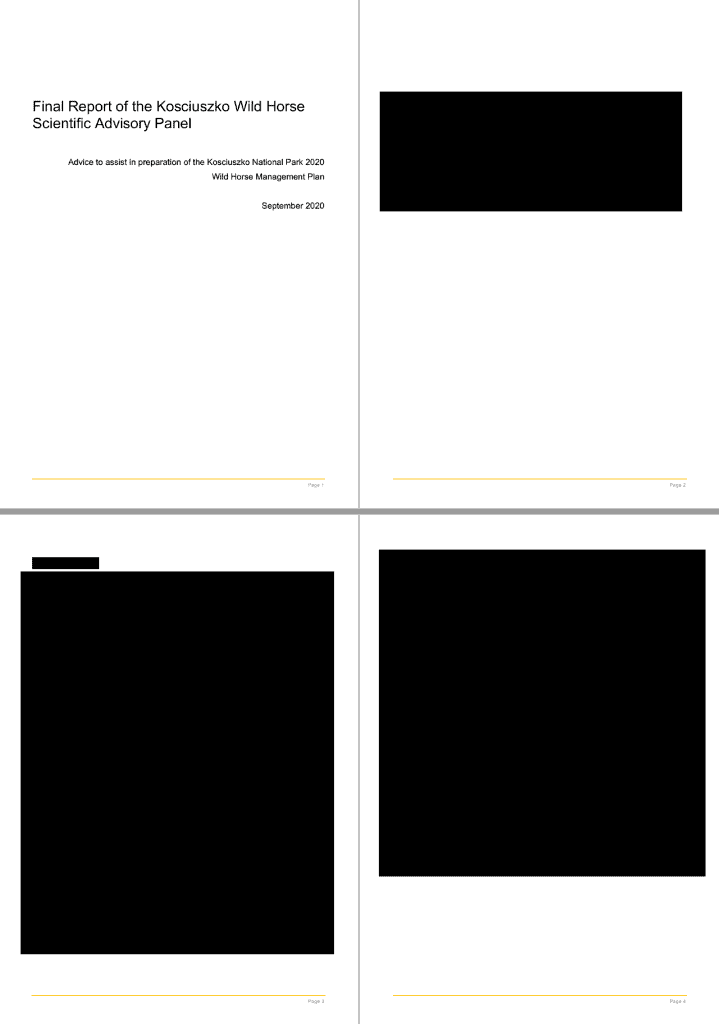 There has been little information about the process and no opportunities for public input.

Since the Kosciuszko Wild Horse Heritage Act was enacted, it took 14 months for the government just to form the community panel and begin work on a new horse plan.

There had been scant public information about progress. NPWS issued an average of one public newsletter every six months. There is no formal channel or regular meeting for those concerned about the environment to learn about what is happening.

There has been no specific opportunity for the public to provide input. The only views that have been sought were through the community and scientific panels. Attempts by Reclaim Kosci representatives to receive a briefing from the NPWS about the results of the 2020 horse park-wide survey were refused. Instead, representatives of horse advocate groups were personally briefed.

The work of the community and scientific panels is done in secret. The minutes of the panels are not made public. Instead, a brief communique is issued after each meeting. These communiques mainly describe process rather than the collective views of the panel. It is not possible to learn what advice the community and scientific panels will be providing to the NPWS, who are charged with developing the new horse plan.

Reclaim Kosci submitted a formal application to access the panel minutes and their advice via the NSW government’s freedom of information law, the GIPA Act. In response Reclaim Kosci were denied access to all 16 documents in scope, claiming this would ‘prejudice a deliberative process of government’ and ‘prejudice the effective exercise’ of the department’s functions. On appeal Reclaim Kosci received heavily redacted parts of the minutes and some of the scientific panel’s advice responding to the black summer bushfires, but every word of the final advice from the panels – 240 pages in all – was redacted[3].

We have since appealed to the NSW Civil and Administrative Tribunal to review the decision. We believe that the public interest test has not been correctly applied. The NSW government is relying on an argument that the advice of the panels is to be provided to the NSW Minister for the Environment and should not be made publicly available until the horse plan is finalised.

This ignores the fact that the panels are meant to provide their advice to the NPWS which is charged with developing the draft plan, not the minister. The draft plan will then be placed on public exhibition for 30 days. The government proposes to suppress the scientific and community advice when they are being asked to comment on the draft plan! The main means of representing community views in the process is through the Kosciuszko wild horse management community advisory panel.

Extraordinarily it is no longer possible to find out the panel membership because of threats of violence to panel members by horse advocates. The names of panel members were quietly removed from the NPWS website in June 2020. One of the tactics used by horse advocate bullies to get their way is to threaten violence. This should not be tolerated. Here we will refer to the makeup of the panel without mentioning names.

The community advisory panel is made up of eight members, but it is hardly representative of community interests. The panel chair is a nominee of Snowy Horse Riders Association. There are three other horse advocate representatives, including one representing a brumby rehoming group based in Victoria and another who is a founding member of the Snowy Horse Riders Association. The remaining four are the deputy chair who is the NSW Chief Scientist, an Indigenous representative and two members who are local farmers, one with environmental sympathies.

We don’t know the contents of the community panel’s final advice to the NPWS and the Minister for the Environment since it remains secret, despite Reclaim Kosci’s attempt to obtain a copy via a freedom of information request (referred to above). Clues about the main concerns of the community panel can be deduced from the appendices in the final advice that were not redacted. There is a proposal from the Victorian Brumby Association to fence off the Snowy Mountains Highway and undertake fertility control of horses in the area, there is an extract about the importance of horses in the history of Kiandra area and there is a copy of a 2006 MOU between the Liberal/National Party and a coalition of horseriding groups that commits to protecting ‘viable populations’ of feral horses in NSW national parks and bans shooting feral horses as a control option.

More than seven years ago the NPWS embarked on an exhaustive and rich process to engage with the public to develop a new horse plan for Kosciuszko.

The aim was to not only gather traditional stakeholder views but also engage with the general public through specifically designed activities. The consultants engaged to conduct the consultation noted that this could ensure that government’s decision on the plan can ‘genuinely reflect the values of the broader community (and not just those of vocal stakeholders) and have broad community support’. In total about 21,000 people over a seven-month period were reached through these activities.

The formal community engagement process began in May 2014 and included[5]:

At the end of the 2014 process the consultant noted, “stakeholders’ views, which are polarised at either end of the wild horse management spectrum, do not reflect the views of the general public, although there is a closer alignment between the views of community members and environmental advocates, than horse advocates…While community members are open to hearing NPWS’s views and being influenced by scientific evidence, stakeholders hold very strong views, which are unlikely to change. Community members are most interested in the effectiveness of control measures.” Amongst the general community, lethal control was supported after they were well-informed, if it was well justified and implemented.[6]

A recipe for failure

The draft horse management plan developed in 2016 represented an attempt to listen to the community, to embrace all sides of the debate and to find a way forward. It wasn’t the best plan, but it was the product of exhaustive consultation and had more chance of success than the previous 2008 version that saw horse numbers rise. It sought to navigate and incorporate diverse perspectives and was widely supported.

It was deeply flawed to override the 2016 draft plan through special legislation in 2018 and a subsequent process that excludes legitimate community voices. Such an approach will fail because it ignores a large sector of the community – those who want to see environmental and Aboriginal cultural values of the national park protected from feral horses.

Meanwhile we have lost five valuable years. In that time the number of horses in Kosciuszko National Park has more than doubled and the solutions to limit their numbers have become more difficult to implement. Trapping on its own, even if massively expanded, is even less likely to keep up with horse breeding rates of the larger population. Horse numbers and the associated impacts will continue their exponential climb.

John Barilaro offered people a false hope of balance and a voice for community. Instead he has delivering a national park full of thousands upon thousands of feral horses. Almost nobody wants that.

[3] Documents provided in response to the GIPA application are available at the bottom of this page: https://reclaimkosci.org.au/2021/07/19/foi-documents-reveal-advice-ignored/

[5] View the documents describing the process and outcomes under ‘Supporting documents’ at https://www.environment.nsw.gov.au/research-and-publications/publications-search/2016-draft-wild-horse-management-plan-kosciuszko-national-park