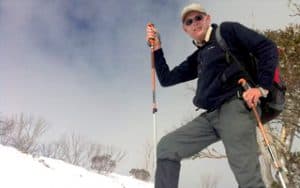 In the late 1970s I started working in the Dead Horse Gap – Main Range area on my PhD. I was studying small mammals and insects. I set up camp in a pleasant spot just above the treeline and near my study areas, and used the faint footpad from the crest of Dead Horse Gap to reach it. Several visitors ended up in my camp by following the footpad that I used, thinking that they were on the route to the Ramsheads, so I had plenty of company.

Walking between my study areas was quite an effort in those days because the undergrowth was untracked and quite dense. During this time I never saw any evidence of horse tracks above Dead Horse Gap. The only wild horses I saw were south of Cascades.

After returning to work in the mountains in 1994, I found that the faint footpad from Dead Horse Gap had become a track. There were horse droppings along it all the way up to South Ramshead; from the top of the track the droppings spread over the herbfields into the alpine zone. I’d never seen so much and I wondered whether they had been forced up by the drought. However, when the drought ended the horses remained.

From 1996 onwards, I noted that the horses had made a lot of trails. The tracks made it easier for me to move through the bush but it also made it easier for foxes to move through my old study areas where they were having a major impact on the wildlife. This prompted me to initiate a long-term fox baiting program concentrating along the main tracks up from Dead Horse Gap.

Those were the early days. Forty years on, instead of one faint footpad, there are numerous trails transecting this area. It’s heart-breaking to see the habitat being trampled, particularly for my little friends the broad-toothed mice, which rely on the shelter of grass and shrubs to reach food and water.