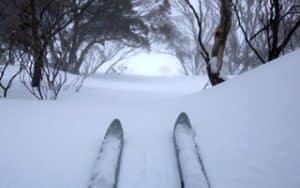 In my life as a biologist I have done many strange things. I composed a poem for the backs of ski-lodge toilet doors, asking people to save pygmy possums and other small mountain animals from drowning by keeping the lid closed. Over two winters I trapped and collared feral cats near Guthega and then radio tracked them through the snow. I skied around with my antenna and beep box which sent amusement through the Perisher skiing community, prompting such daily yells from the chairlifts such as “Hey love, can you tell me what the football scores are?”

Now after nearly twenty years of involvement with Mountain Pygmy-possum research, feral cat research, various Alpine scientific forums and the author of two Alpine recovery plans, I feel I might know something about Alpine ecology. Representing less than 1% of our entire continent, Alpine and sub-alpine environments are most fragile, beautiful and bountiful. Other than the Australian Alps, which stretch along the eastern side of the continent, only the tiniest fragments of the highest mountains in other states of Tasmania, Western Australia and NSW ever receive snowfall.

So, about this wild horses issue.

I’m not a horse expert. I like horses, in the same way I like cats, and rabbits. But I also know that these animals do not belong in the Australian natural environment, least of all our alps environment. I know of others whose research has observed the terrible suffering of these horses when caught above the winter snow line by the snow. Sure these horses make beautiful pictures on social media. What those people who are loving that aesthetic moment don’t remember is that horses don’t dig, and they can’t see their food through the snow. They end the winter starving and in poor condition. For those horses which take a wrong step off a rock or down a hole and snap a leg, it is a long, cold, lonely end by starvation and stress. It’s a sure indication that these animals are not adapted to this particular environment, as much as the environment is not adapted to them. These horses were a legacy left to the bush after their use as stock horses and European descendants have since built legends around them.

Australian landscapes, plants and animals have evolved on this continent without creatures with hard hooves. Our fragile soils are susceptible to these animals, and we know this from major damage that has occurred due to grazing activities to the west. Once denuded of vegetation, fine soils can be carried in enormous dust storms to the east. Alpine soils are also incredibly fragile, formed from glacial action and eroding volcanic granites which contain poor nutrients. This is why so many of our alpine plants and their communities (particularly those above the tree line) are small, highly-adapted and susceptible to damage.

The sphagnum bogs and fens, an extremely beautiful, fragile and terribly important alpine ecological community, collect, exchange and moderate waters from rainfall and runoff. Without these complex plant communities and the fauna that maintain them, we would not have the moderated flow of water that we now redirect for use in agriculture, recreation and water supplies in cities and towns west of the ranges. A technical report to the government in 2011 (Worboys and Good) which was commissioned to assess the health of the alpine catchments, conservatively estimated the value of this water alone to be worth $9.6B annually to the Australian economy. It found that many areas of the alpine catchments were already in poor condition, and feral horses were one of the significant threats to ongoing catchment security.

By protecting horses in the National Park, it is taking a foolhardy step to placing this precious environmental, economic and social asset in jeopardy.

In the same way there is consensus amongst world scientists that Climate Change is upon us, there is also consensus amongst the scientists who study the different disciplines of alpine ecology and biology that feral horses, along with feral goats, pigs and deer which impact the environment in similar ways are a clear threat to this fragile landscape and every community and species within it. From the bogs and fens, alpine snow patches, the sub-alpine woodlands to the threatened animals, such as Guthega Skink and the Mountain Pygmy-possum, the damage done by horses affects habitat.

Yes, we humans cause damage too, and ever since we arrived in the alps our activities have been observed to be causing damage. But thankfully, we stopped grazing and expanding ski resort boundaries for example. We now have processes to ensure our activities are assessed, monitored, sustainable and reduce impacts on the environment. Horses don’t have processes. They will go where the food is, or where the water is. They graze on alpine plants and grasses which other endemic species rely on for shelter and food. To access water, they trample bogs and incise stream banks with their hard hooves causing erosion. Sediments and droppings are freed into clear alpine waters where they choke important stream biota, and can cause unwanted algae to thrive.

I have heard so many sides of this story. On one side of the debate are vocal group who revere the folklore of the burly mountain men riding horses valiantly down steep hillsides rounding up their cattle. They may represent values of historic gallantry, but are these values more important than those of all the others who ascribe different sets of values to the alpine environment?

The most recent version of the draft Wild Horse action Plan (which was painstakingly developed by staff from NWPS Jindabyne), acknowledged the values expressed through the public consultation process and offered a middle ground. That middle ground was to not completely eradicate the horses, but to cull enough via different methods to leave a small population that was sustainable to manage and keep out of sensitive alpine environments. This has fallen on deaf ears. The horse lobby seem to see science as just one kind of opinion.

The science on this has been undertaken over thousands and thousands of combined hours of research by people like me. People who value the uniqueness, beauty of the Alps and have sought to understand how and why it works for the benefit of its endemic flora and fauna and us.

If we are going to protect our alps as long as we can from climate change, feral animals, weeds and the damage they cause, then we need to listen those who have made the effort to understand how it works. We need to properly fund our land managers to do the job of conservation, and not be stonewalled by political agendas. Sadly, and again like climate change – despite knowing the risks, we may fail to save something we hold precious if we don’t up stand for it. Horses have opened up this sphagnum bog between Dead Horse Gap and Cascade Hut.